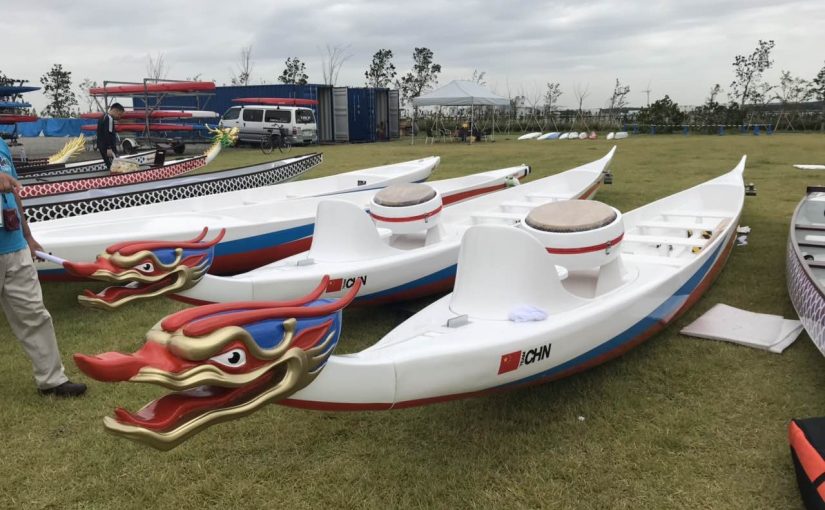 Some of the processes and thinking behind the new dragon boat designs unveiled at the 2020 Tokyo Olympics (held in 2021).

I have long been involved with rowing, first at Loughborough University, then Sons of the Thames in Hammersmith. I have also had the chance to row dragon boats in Taiwan, and even the Greek navy’s Trireme when it visited London in 1993. I was very excited, therefore to be part of the team working on this new design for an Olympic racing dragon boat.

Dragon boats crop up in many different countries in east Asia but the design is highly localised. There are more than one standard of dragon boat design for International competition, but the proposal to include the event in the Olympics required a re-think of the entire design.

There have been attempts to build dragon boats with a narrower beam in order to decrease drag. These tend to suffer from a lack of stability (unlike a racing shell, there are no outriggers to provide resistance to the tendency to roll).

Our design placed athletes side-by-side, but with a narrower beam than normal and with specially profiled hull section to improve stability. We also focused on streamlining and weight saving in other elements such as the drum, drummer’s seat, dragon head, tail, steering paddle etc.

A key area was the development of suitable footrests. In canoeing as well as traditional rowing, the bulk of the power in a stroke comes from the legs. This is also true of dragon boat racing. Although it appears all the movement comes from the torso and upper body, any serious crew will seek ways to transfer power from the legs. Existing dragon boat designs are extremely poor in this regard — there is rarely anything other than the internal crossmembers (stringers) against which athletes have to brace their feet in order to get the necessary leverage. We introduced proper canoe-style adjustable foot braces in our prototypes. Although the official rules state that the athletes should be seated, most of the weight when racing will be supported by the feet.

We worked with the Kanghua factory in Qianhai lake 千岛湖 in Zhejiang on the design. This company manufactures many different boats including canoes and racing shells. Its technicians have excellent skills with traditional as well as modern materials such as carbon fibre.

The prototypes have been tested in Qiandao Lake and have been presented at the ICF World Championships 2019 in Ningbo and the Tokyo Olympics 2020 (held 2021).